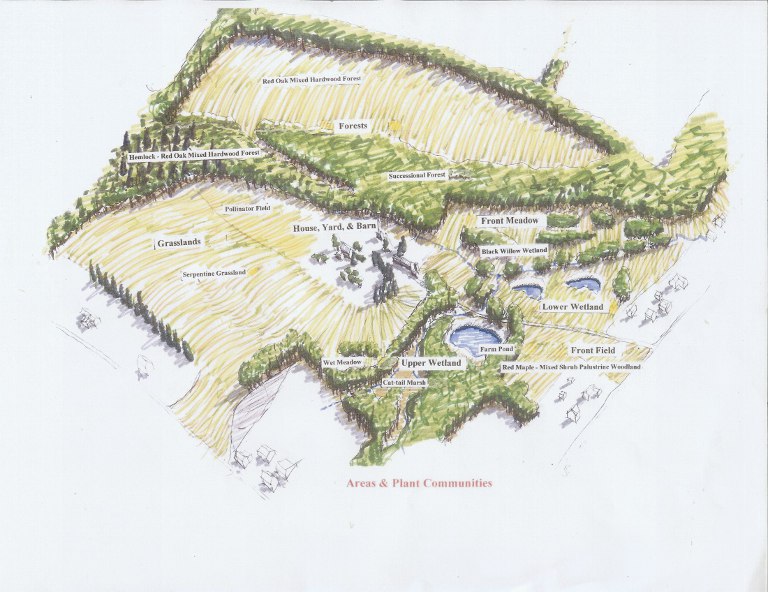 The farm includes seven different areas with different growing conditions, including soil types, slopes, and moisture levels.  An on-going project is to identify these different areas and the natural plant communities that occur within each or might be expected to be found.  To provide easy access to these areas, we are maintaining trails into them, and we are developing maps and other materials to provide guidance.  A goal is to enable someone to encounter a number of different ecological communities in a couple of hours and to understand what they are seeing.

The main areas we have identified are listed below.  Some of them are natural in the sense that we have done relatively little to them other than attempt to control invasives.  Others have been planted and/or built in the sense that we have introduced plants and/or trees consistent with their conditions; and, in some, we have built small ponds or other features.  To determine the specific plant communities most likely present in these different areas, we have relied heavily on Jean Fike's excellent Terrestrial and Palustrine Plant Communities of Pennsylvania (1999), unfortunately no longer available in print but accessible online.

Although not a "plant community" per se, the area around the house, yard, and barn -- some 3-4 acres -- includes a number of native plants and other wild flowers in close proximity.  It lies roughly in the center of the property.  It is bordered on the south by a wooded hillside with a small, intermittent stream at its base that enters the property on the east and runs west to join a second, larger year-around stream that runs largely north-south.

This small, three-quarter acre field was planted in 2011 with some 20 varieties of primarily native wild flowers but including several clovers and non-native plants that bloom at appropriate times.  The purpose of this field is to provide food for bees, butterflies, and other pollinators to increase their numbers.  It lies east of the house and yard, north of the same hillside that the house faces, and south of the Mesic Grassland.  It was built with the with support from USDA through their Wildlife Habitat Improvement Program (WHIP).

This area -- a little more than 15 acres -- is a grassland planted in 2006 with support from USDA through their Conservation Reserve Enhancement Program (CREP). It includes a 30-foot periphery of cool season grasses -- Timothy and Orchard grasses -- and a 12 acre center of warm season grasses -- Big Blue Stem, Little Blue Stem, Switch Grass, Indian Grass, and Side-Oats Gramma.  This combination is consistent with a Mesic Grassland  community, having moderate moisture.  It lies north of the house, yard, and pollinator field and extends to the north and east boundaries of the farm.  On the west, it adjoins the Wet Meadow.

This naturally occurring Wet Meadow is riparian, running largely north-to-south, and comprising 2-3 acres.  It is highlighted  by several clumps of New York ironweed that glow purple in the fall.  It lies west of the Grassland and east of the Cat-tail Marsh.

This small Cat-tail Marsh -- less than a half-acre -- lies west of the Grassland and is bounded on the west and south by an all-season stream, some 6 to 8 feet across, that enters the farm near its north-west corner, meanders south before swinging west and exiting the property.  The marsh is kept wet year-around by a second small, 1-2 foot all-weather stream that comes from a spring in a neighbor farm pasture.  The marsh is dominated by Cat-tails (as the name implies), Calamus, Sensitive Ferns, the would-be invasive Purple Loosestrife, Jewel Weed, and Tussock Sedge.  It is accessible from a low-impact puncheon walkway that "floats" on the wet ground.

This small, half-acre pond lies south-west of the marsh, west of the larger stream, and north of our farm lane.  It was constructed in 1975 by neighbor-excavators with support from a USDA Agricultural Stabilization and Conservation Service program.  It is oval in shape with a visual barrier on the west of hybrid poplars.  Prominent plants include a large swath of native Daylilies, Cat-tails, Yellow and Blue Flag Irises, and Sumac.

This 3-4 acre planted woodland lies west of the farm pond and continues out to our public road;  it is bounded on the south by the farm lane and on the north by our property line.  The central portion tends to stay wet from seeps but dries out to the west as it approaches the road.  It was planted through a Penns Valley Conservation Association (PVCA) program in 2004 with a variety of wet-tolerant trees and shrubs that approximate the Red Maple -- Mixed Shrub Palustrine Woodland plant community.  These include Red Maple, Swamp White Oak, Pin Oak, Black Ash, Green Ash, White Pine, various Willows, as well as Dogwood and Maple Virburnum.

This built and planted wetland is a work in progress.  It is dominated by two small, shallow ponds, each about one-third acre, that were built in 2004 with support from the Penns Valley Conservation Association (PVCA) and U. S. Fish and Wildlife.  These pools are full in the early spring and almost dry out by August, reducing their size by half to two-thirds and exposing mud flats that sprout new growth and invite a variety of birds to browse.  Naturally occurring plants include Cat-tails, Wool Grass, Soft Rush, Green Bulrush, and other sedges and reeds.  This wet/dry behavior and the plants observed identify the wetland as an Herbaceous Vernal Pool in the making.

The site lies south of the farm lane and is bordered by the stream that comes by the marsh and farm pond and by the front (west) property line.  There are riparian plants, such as Willow and Spotted Alder along the stream, as well as sedges, rushes, and reeds in the wetter areas.  For several years, we have been planting additional trees and shrubs that are consistent with a wetland habitats such as Vernal Pools, and we anticipate continuing doing so.  A major theme is to control views of the pools from the farm lane and trails as well as views from within the wetland to outside areas.

This natural area of some 5-6 acres lies on the south bank of the stream that borders the wetland.  It is riparian and conforms to the Black Willow Scrub/Shrub Wetland community.  A prominent feature is two enormous Black Willow trees, and we have planted several more along the stream.  These trees provide several levels of habitat for different birds.  They are very dynamic and sculptural as limbs sag or break, take root, and produce new trees around the parent.  Shrubs include Black Alder, Bush Willows, and Sumac.  Herbaceous plants include Calamus, Tall Meadow Rue, Snake Root, Canada Lily, and Blue Lobelia.

The hillside that the house faces runs east-west the entire length of the property -- some 4/10 of a mile.  It is bounded on the south by the Red Oak -  Mixed Hardwood forest.  In 1974 it was an open pasture with a few scattered trees.  Since then, it has become completely covered with trees, many of them 30-40 feet tall.  Unfortunately, a large number of those trees are elms, almost all of which have died that last few years.  A current and on-going project is to cut down the dead elm and release the other species which include Oak, Maple, Cherry, Locus, Walnut, Hickory, and Apple.  We are also planting other species of full-size trees but also mid-canopy species that are members of the Red Oak - Mixed Hardwood community.  Some of the mid-canopy species include Serviceberyy, Redbud, and Flowering Dogwood.  This work is being supported in part by the Wildlife Habitat Improvement Program (WHIP)..

This small, 3-4 acre triangular Hemlock - Red Oak Mixed Hardwood Forest lies at the east end of  the property and on the hillside that is largely successional.  It is one of the few patches of natural woods on the property.  The slope is steep and north-facing.  Trees include members of the Red Oak community as well as Hemlock, Beech, and Hophornbeam.  A small green orchid has also been observed under the Hemlocks.

This large, nearly 13 acre field sits on top of the hill that the house faces and that the successional forest occupies.  It is triangular in shape and touches the east, south, and west property lines, running approximately 4/10 mile. Conversion of this former crop field to a forest was begun in 2005 with support from USDA through their Conservation Reserve Enhancement Program (CREP).  A forest plan was developed by a forester with Centre County  Department of Conservation and Natural Resources (DCNR).  It includes three wildlife protection and feeding areas in the corners of the area, each with several circles of conifers and mast fruit trees in the center.  In the majority of the area, some dozen species from the Red Oak - Mixed Hardwood community were planted in several zones.  These included Red Oak, Black Oak, White Oak, Maple, two kinds of Cherry, two kinds of Hickory, Basswood, White Ash, and Tulip Poplars.